Off to a Fantastic Start!


In March, I posted about reviving this blog as part of starting a new phase of my life:  Retirement! And what this would mean to reinventing myself as a “full-time” artist. Happily, my new artistic life has gotten off to a fantastic start.

One of the works in progress from that March 5 post featured a cast-paper bookshelf filled with tiny books that I’d made. I was able to finish the entire piece in time to enter it for the annual Salon Show at The Gallery 4 in ’s . The gallery’s original email, notifying me that the piece had been accepted, ended up in the spam folder (!) but luckily I found it in time, and dropped off the piece at the gallery three days before the opening. The title is "Death of a Bibliophiliac." 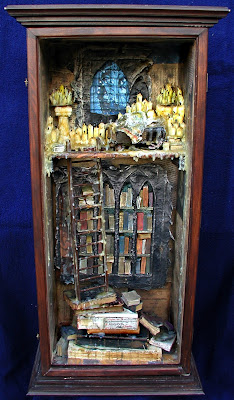 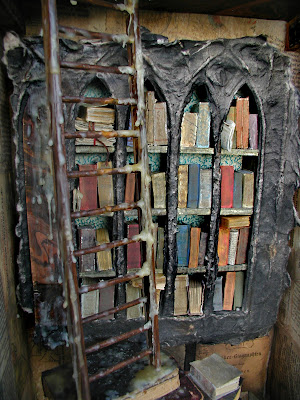 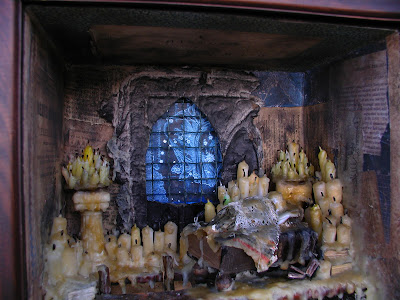 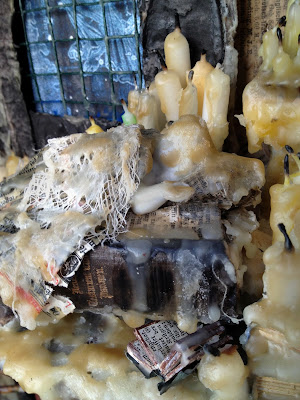 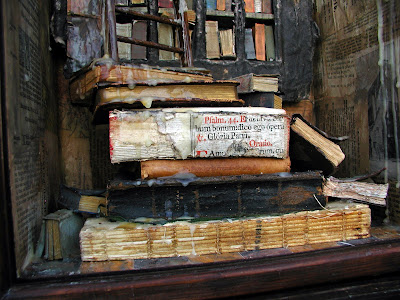 As mentioned before, the piece is a tribute to Dutch artist Peter Gabrielse, with a nod also to Joseph Cornell, who also used antique star charts in his work. I was raised Roman Catholic, so the sight and smell of many candles burning  is something that always evokes my childhood. The stack of books that the ladder rests on are actual vintage books, some from German flea markets obtained when I lived there during the 1990s. The thickest one is a prayer book that was bound (sometime in the early 19th c, if I remember correctly) in paper recycled from an even older book, a common practice throughout the history of books. I started to disassemble it to use the pages in collage, but went no further when I saw the old printing underneath the spine.


Below is a photo of the piece installed in the gallery, with apologies for the poor quality. The lighting was subdued to lessen glare, but made it difficult to photograph with my phone. (The almost-impossible-to-see etching hanging above my box is by Ciara Gray.)

If I needed further encouragement to pursue my artwork, this was certainly it. Full-steam ahead on the other works in progress! As well as a list of 6-10 long-planned pieces that are embryonic rather than in-progress. Fodder for plenty of posts.

MEANWHILE, on the first Saturday of retirement, my dear friends Sharon and Dave threw a retirement party for me, attended by many of my favorite people and filled with good food, conversation, music and their three friendly dogs! It was truly a labor of love on their part, and I am so grateful. It was a very special way to start retirement.

Later that week, I went with friends to see giant glass flowers by artist Jason Gamrath at Phipps Conservatory
Next, we attended Phipp's annual May Market sale, where I purchased a hand-made garden ornament, which will no doubt feature in a future post.

The next evening was the opening at Gallery 4, which lasted several hours and enabled me to meet some other artists, as well as another gallery owner who expressed interest! But I quickly realized that if I kept up this social pace, I would be too tired to make art. It's time to slow down and get back to art-making!

BACK IN APRIL, pre-retirement, my friend Kris and I made an excursion to Ohio to the rt Museum to attend an exhibit, "Turn the Page: The First Ten Years of Hi-Fructose". This included contemporary artists who had been featured in Hi-Fructose art magazine during the first 10 years of that publication. We went on a Thursday (I took the day off) because that evening one of my favorite artists, Beth Caverner, (www.followtheblackrabbit.com/) was giving a talk. In a humorous and thought-provoking presentation, she shared the ups and downs of her artistic journey, and the breakthrough which set her on the path to her artistic blossoming. This was her discovery that people respond more readily on an emotional level to animals than to fellow humans. And so she began sculpting her signature clay menagerie, animals in attitudes and situations that convey human feelings. The label for her piece, below, states that "These animals communicate through gesture, with their body language acting as a metaphor for human psychological states...often responding to events in her personal life. Unrequited refers to Cavener's lack of feeling desirable after having her first child."

All the art in the Hi-Fructose show was stunning, very contemporary, and incredibly well-executed, even if not to my personal taste. A sampling of the art on view: 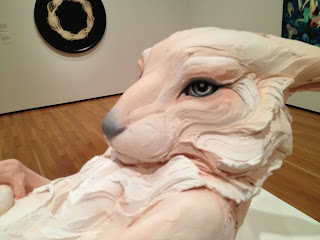 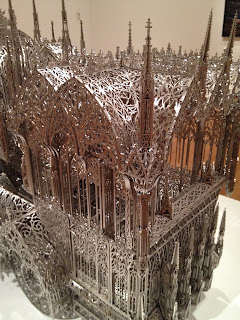 ON THE DRIVE to , Kris and I had a discussion about “being an artist” and what attributes allow one to claim that title. Not that either of us really has anything but personal observation to go on; we are not up on our “isms” and contemporary art criticism is like language from another planet. In spite of our lack of art-world creds, we decided that nothing beats an interesting idea, well-executed, in a well-designed work. This includes conceptual, installation and performance art.

Here’s what else we came up with:

·         ORIGINALITY. The Japanese have been making wood-block prints for generations, yet every print-maker of note, while using time-honored techniques, has had something new and original to say. In short, avoid clichéd images. Milk cans in a field of daisies and tropical sunsets have been done. Millions of times.
o        What you can get away with:  paint the above, with the intent of irony. Make this clear.

·         ABILITY. The legendary graphic designer Milton Glaser observed that everyone at the Push Pin Studios (which gave us numerous classic ads and posters) could draw. It’s OK to break rules, but not if you’re doing so because you could never come up to snuff in the first place. Of course, there have been great artists (Joseph Cornell, for one, whom I revere) who never drew. But what they did, they did with total command of their materials.
o         What you can get away with:  do “bad” drawings deliberately, with attitude

·         AUTHORITY. Show hesitancy in the work and the viewers will know, if only on a subliminal level. So, you can draw like Leonardo but you want to make images of people with rubber arms and faces askew? Go ahead. But do it like you KNOW you know how to draw but are choosing to suspend the rules (see above), because you have something original to say, and you’ve made the conscious decision that dodgy anatomy conveyed it best.

No particularly original thinking here, but it was an interesting discussion!

I CLOSE with an observation on retiring:  I expected retirement to be a big adjustment; it is, after all, a total change in my daily routine. What has actually happened, is that being able to call my time my own has taken no adjustment at all! In fact, it was keeping up the employee mind-set for decades that took adjusting to, and I quickly sloughed that like a snake shedding skin that no longer fit. I am grateful that jobs provided the wherewithal to keep a roof over my head, but having spent all that time doing tasks many others could have done, I am now free to pursue that which only I can do:  my own artwork. Yippee!
Posted by Diane at 9:13 PM 2 comments:

Preparing For a New Beginning


In the April of 2010, I started this Collagitation blog as a means to present my collage-a-day project, “3SIXTY5”, in honor of my 60th birthday. Now, in 2017, it will be reborn as a platform to document my journey from full-time employee to full-time artist.
As of May 5, 2017,  I’M RETIRING!!

Much has changed in seven years. There have been losses (my dear mother passed away in 2013) and gains (I got a new knee and the house got a new back porch); but what has remained constant is my desire to do my artwork, with my full attention, whenever I choose, and without interruption.  That’s a lot of emphasis on me, my and I.  Surely there are greater reasons, beyond personal fulfillment, for why people are given talents? This too I will discover, in time.

Meanwhile, here is a sample of what I’ve been working on. All of these were begun within the past 12 months; none is finished yet.

This first piece is entitled "Owl for David Caspar Friedrich," who is one of my favorite painters. (http://www.caspardavidfriedrich.org/the-complete-works.html)

You can see the painting that inspired it here, https://commons.wikimedia.org/wiki/File:Owl_in_a_Gothic_Window_by_Caspar_David_Friedrich.jpg 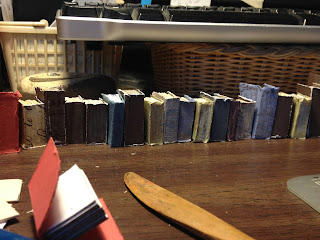 This piece was inspired by another favorite artist, Peter Gabrielse, whose work I discovered last year on Pinterest. His website is here: http://www.petergabrielse.com/ And if you are into interiors as much as me, on my Pinterest page you can see photos of his home in Normandy (as well as his artwork) https://www.pinterest.com/diakea/peter-gabrielses-world/ though it is sometimes difficult to distinguish rooms in his house from those in his work.

By the way,  most of the photos of Gabrielse's home were taken by London-based jewelry designer and photographer Kotomi Yamamura, who travels all over Europe every summer taking photos (MAJOR ENVY!!), and visits Peter. You can see her work here, https://www.flickr.com/photos/kotomi-jewelry/albums  I recommend scrolling through her albums, there is an amazing assortment of inspirational things to see! Unfortunately (for me) her blog is in Japanese.

You can also see boards of my painting, collages and calligraphic art on my Pinterest page.

Finally, one more work in progress, tentatively entitled "The Cosmos in Her Hand." Another tribute to my love of books, reading, and the allure of old objects. 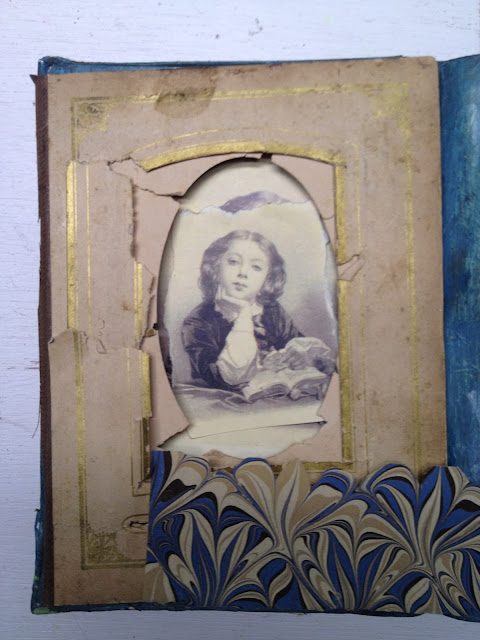 That's it for now!


Watch this space!
Posted by Diane at 1:00 PM No comments:

Unless otherwise credited, all the artwork, photos, and text on this blog are copyrighted by me, all rights reserved. Please do not steal, it generates very bad karma!

Diane
I love making artwork, reading, searching for treasures in thrift shops and flea markets, and for inspiration all over the internet. Please follow my work on www.instagram.com/diakea6790