The Case of the Missing Title

Time is passing too quickly, as it always seems to. But not without progress. Two more pieces of work have been completed for the art exhibit in July, and several more are in the pipeline. I met with the other artist, Valerie Herrero, with whom I will be showing, and we came up with a title:  "Journeys Collected and Contained." Our art is visually very different, but we found, to our delight, that we share many underlying themes and concerns in our work.

The piece in progress in my last post turned out rather differently, but, I think, much better, with the addition of an old brass printer's block of a man's image.  Now there is a face to go with the name on the bookplate that gives the piece it's title. Here's the final version, with a detail shot: 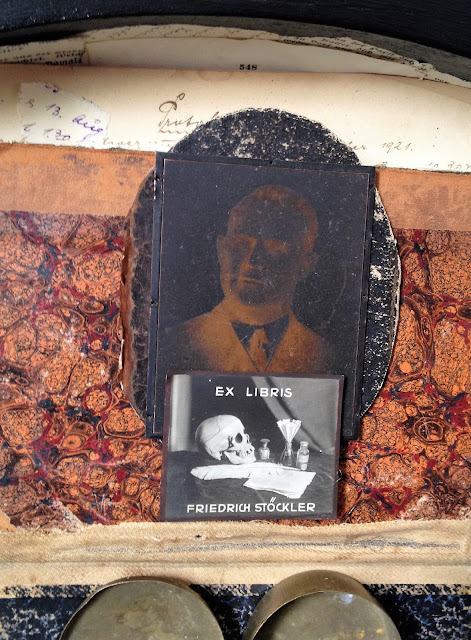 Several of the items I used were brought back from my time in Germany during the 1990s, such as the bookplate, the brass box, the crucifix figure, and the papers that form the background. Note the date, 1921, just barely visible on the paper to the right of the man's image. (If you do Ctrl + click on the image, it will open at full size in a new window.) This is an actual sheet taken from a hand-written notebook, written (in German) in 1921. I was afraid the ink would smear when I coated it with acrylic gel to attach it to the backing, but fortunately, it did not.

I also completed an assemblage box whose title is still pending, because I can't make up my mind. 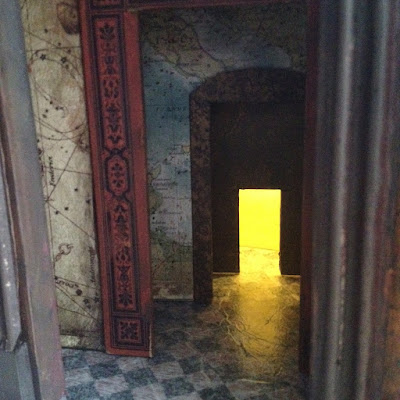 As for the title,  originally it was simply "Enfilade", meaning the view through a series of rooms that open out of each other (as was the case in the era before separate hallways for passage.) But a friend pointed out that enfilade can also mean a volley of gunfire. Nope.

Meanwhile, I was reading one of Donna Leon's fantastic Venetian mysteries, The Golden Egg. I came across this sentence, addressed to her protagonist, police detective Commissario Brunetti: "Come in, Commissario, and I shall tell you mysterious things."  Wham! This became the title, minus "Commissario."  But I wonder if it was too long? Especially since I want to include the attribution:


"Come in...and I shall tell you mysterious things."
Donna Leon, The Golden Egg

Maybe. I still love it!

Next idea, "Mystery Lives Here." Not too bad, but sounds rather like a slogan? Or something.

Then, I came across another quotation, from the artist who originated box art, Joseph Cornell (he is my god.) "The Light of Other Days" is Cornell's epigraph to Bel Canto Pet, his written homage to the great Romantic-era mezzo-soprano, Giulia Grisi. I think that could stand alone, without the attribution. Those who love Cornell as much as I do, would get it.

So, what shall it be? I have until July to make up my mind. Meanwhile, back to the studio! Here are some glimpses of what else is cooking.

And, on a final note, I was accepted as a member of the Pittsburgh Society of Artists at their recent Spring Membership Screening. Yippee!

I love to hear from you!

Unless otherwise credited, all the artwork, photos, and text on this blog are copyrighted by me, all rights reserved. Please do not steal, it generates very bad karma!

Diane
I love making artwork, reading, searching for treasures in thrift shops and flea markets, and for inspiration all over the internet. Please follow my work on www.instagram.com/diakea6790